For millennia, long before humans first ventured into this watery world, nature was the dominant force moulding the region we now know as the Netherlands. For millennia life revolved around: the search for food and shelter; the trials of raising young, of growing up and finding a mate. Universal themes that touch the hearts of audiences young and old A thousand years ago, we humans began to also to play a role. Over the ensuing centuries, Dutch culture has defined itself in its struggle against the waters. With each new flood and natural disaster new technologies were developed. But that is just part of the story. Humans are not the only ecosystem engineers, shaping our homes to suit our needs. To a greater and lesser extent, every animal, fish and plant leaves its mark. The big difference is that they do that for the most part in a way that promotes life and builds resilience while our human impacts have generally had quite the opposite effect.

Then just 15 years ago, with the announcement of the completion of the largest man-made water defence system ever built, the whole ‘bigger must be better’ philosophy began to be challenged. The giant barrages were strangling the life out of the delta they were designed to protect. A new approach had to be found. Instead of casting nature as the enemy, the search was on to harness her creative resilience and power. A new balance is now slowly returning, one that is bringing a rush of new life to the delta, attracting back birds and animals that haven’t been seen in decades even centuries — such as the beaver and the majestic white tailed sea-eagle.

Holland, The Living Delta is an ode to our the rivers and the diverse delta nature of the Netherlands, in all of its mystery, breadth and beauty. 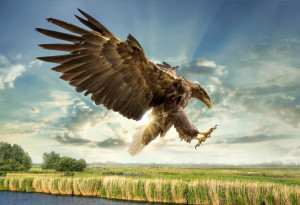 The project
The film went into circulation in theaters and cinema’s on September 24, 2015.

Just like The New Wilderness, the (film)project is tackled widely. The partnerships with the large environmental organizations WWF, Natuurmonumenten, IVN, De12Landschappen and Forestry Commission are unique. In addition, we have been supported by the Association of Water and Public Works to development the educational package Delta in de klas. The theme of the film links itself content-wise to numerous current and future projects that focus on nature and (water) security.

The story of the film is a rediscovery of the Netherlands. An international showcase of the Dutch identity: nature makers and watermanagers.